Did you know only 10% of Canadian kids get enough exercise? Ten per cent! That number makes my heart hurt.

When I was a kid I was extremely lucky to be exposed to all kinds of sports at a young age. My mom was a skating teacher and recreation coordinator at a large rec facility in Calgary. My dad was a college hockey player and a talented ball player. Growing up we were an active family, I did skating, dance and gymnastics with my mom. We went on family walks and bike rides and threw balls around in the park. Eventually I started swimming, which was the sport that really stuck for me.

I now know that establishing that base of physical knowledge at a young age is what made me the confident and competent athlete I am today.

Not all kids are as lucky. Many aren’t taught the basic’s of how to move, jump and run when they are young. Not having those skills takes the fun out of sport and exercise and often discourages kids from continuing in sports into their teenage or adult years.

However, there are a lot of local and national organizations that are trying to change that. The Alberta Be Fit For Life network, which the marathon training program’s own Leah Yardley and Ashley Fox work with, is working encourage Albertans to be active for life through teaching physical literacy. Physical Literacy being the development of skills that permit someone to move competently, confidently and with control in a wide range of activities.

Why is this relevant to my marathon training?

Because this year, for the first time, the program incorporated a cross-training movement preparation series at the beginning of the season meant to work on our physical literacy skills as runners. Often runners only move in one plane, forward. This year, our coaches and coordinators had us moving sideways, up, down and backwards with the goal of making us more well-rounded athletes.

I personally really enjoyed the movement preparation portion of the program. At the start of the year it was a joke that, “we are a running program that doesn’t run”. But as someone who hadn’t done all that much running before I joined the program, the movement prep gave me a way to ease into the training with much less difficulty than if I was just running. Plus, we would do PLENTY of running in the months to come, there was never a shortage of that.

For a much better explanation of how the movement prep went, I want to hand you over to Ashley Fox, marathon program coordinator and BBFL physical literacy coordinator:

For the month of March 2014, the Marathon Program implemented a series of Movement Preparation sessions to help the runners brains and bodies prepare for the running season.  Using the tools created by Dr. Dean Kriellaars we were able to design a program of dynamic, stability, agility and core coach led activities for all runners to participate in.  This time served to increase the variety of movements the runners were doing, to help them build a strong foundation and also give them a great opportunity to meet their fellow runners, form friendships and LAUGH!

The purpose of introducing a month of movement preparation into the training season and incorporating the same movements into the warm ups for the runs all year, was to support the development of skills and the confidence to move in a variety of patters while reducing the risk of short term and long term injury.

When surveyed 100% of the program participants that responded said they strongly enjoyed or enjoyed the movement preparation activities.

Some of the feedback that was received from the marathoners included – that they felt accomplished after challenging their body by learning new movements, that it helped to avoid running injuries, helped them realize some imbalances in their strength or movements that they were able to address, created a great foundation for the running season and helped start everyone one off on the same foot.

For more information and a full guide to Movement Preparation check out: http://www.physicalliteracy.ca/move-prep 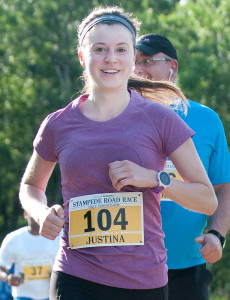